Mechanism of Action of Pasireotide

The mechanism of action of pasireotide and its clinical application in the management of Cushing’s disease will be reviewed.

The Hypothalamic-Pituitary-Adrenal Axis : The hypothalamic-Pituitary-Adrenal (HPA) axis influences cortisol regulation through a complex balancing act between stimulatory and inhibitory factors. Corticotrophin-releasing hormone (CRH), produced in the paraventricular nucleus of the hypothalamus, is ferried by the hypophyseal-portal venous system to corticotroph cells in the anterior pituitary gland(1). CRH subsequently binds Corticotrophin releasing hormone receptor type 1 (CRH-R1) receptors on the surface of corticotrophs. As a result, there is a release of ACTH from secretory vesicles in corticotrophs. It is worthy to note that Arginine vasopressin (AVP) further potentiates the anterior pituitary effects of CRH by acting on its cognate V1b receptor (V1b-R) present on corticotrophs. Also, CRH promotes pro-opiomelanocortin (POMC) gene expression in the anterior pituitary gland, a process that increases adrenocorticotropin hormone (ACTH) production as well (2).

Afterward, ACTH binds to the melanocortin-2 receptor (MCR-2) on cells present in the zona fasciculata of the adrenal cortex, which leads to increased cortisol synthesis(3). Adrenal-derived cortisol inhibits POMC and ACTH secretion by anterior pituitary corticotrophs through a negative feedback loop(4). Additional negative feedback inhibition of CRH and AVP synthesis by cortisol occurs at the level of the hypothalamic paraventricular nucleus(5)(see figure 1.0). 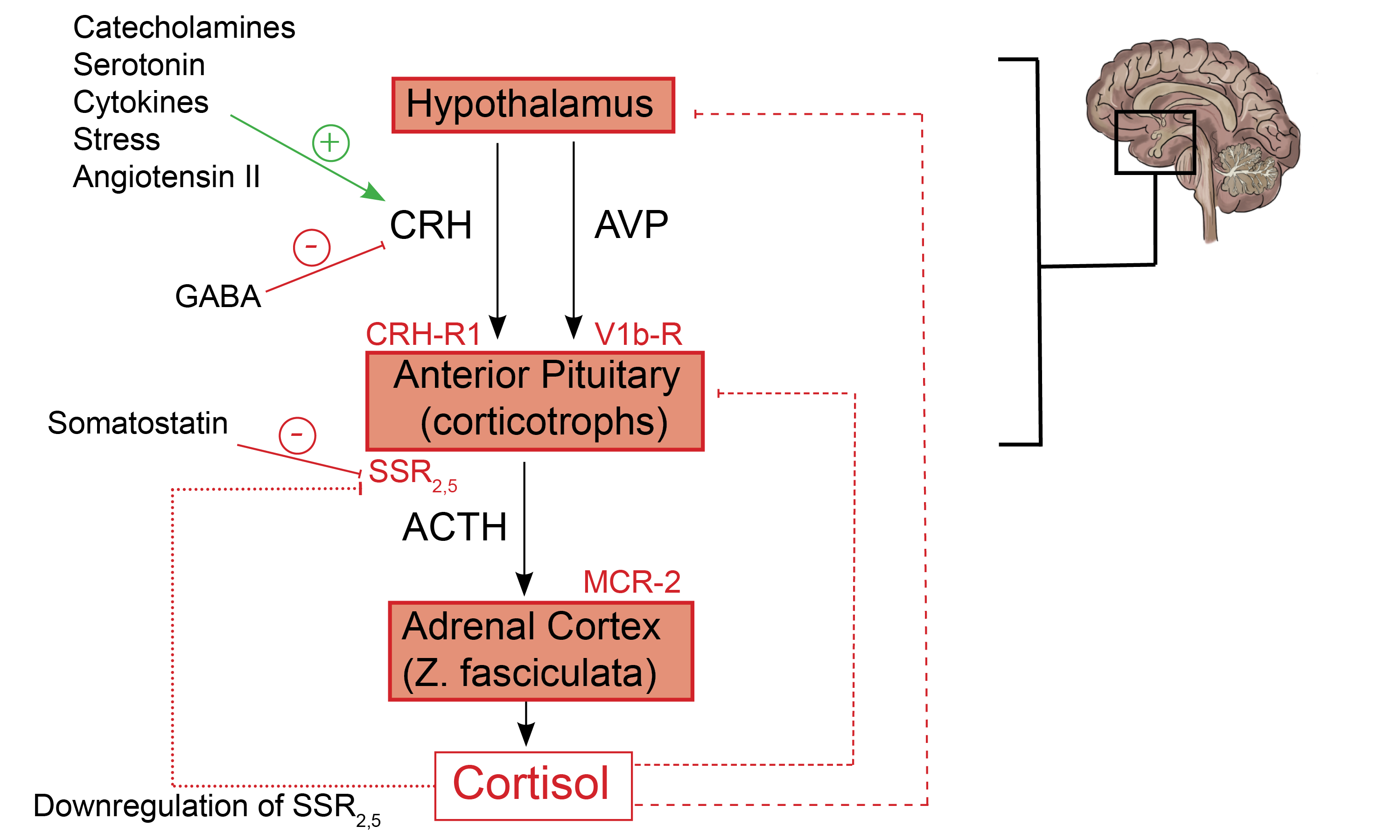 Additionally, AVP from the PVN binds to V1b receptors on corticotrophs which further augments the action of CRH at the level of the anterior pituitary gland(2). Activation of dopamine D2 receptors (D2Rs) present on corticotroph cells by hypothalamic-derived dopamine inhibits ACTH synthesis and release (not shown) (9). Adrenal cortex processes: The binding of ACTH to MCR-2 receptors present on cells in the zona fasciculata promotes the synthesis of cortisol from cholesterol(3). Feedback inhibitory process: Negative feedback inhibition of POMC and ACTH release is mediated by adrenal-derived cortisol (short dashed line)(4). Also, cortisol inhibits the synthesis of CRH and AVP from paraventricular nuclei in the hypothalamus (long dashed line)(5). Cortisol-mediated inhibition of somatostatin receptor expression on corticotrophs affects SSR2 more than it does SSR5 (dotted line)(6). + = shows stimulatory factors and feedback loops, – =  shows inhibitory factors and feedback loops. (Redrawn and modified from Spencer RL et al. (2017) A users guide to HPA axis research. Physiol Behav 178:43–65)

Pasireotide (Signifor) causes hyperglycemia, gastrointestinal discomfort, and cholelithiasis. The reported prevalence of hyperglycemia in clinical trials involving patients with Cushing’s disease who received pasireotide ranged from 68.4 to 73%(11). Hence, it is reasonable to screen for diabetes before and during treatment with pasireotide(12). Incretin mimetics, metformin, or insulin are preferred for treating pasireotide-mediated hyperglycemia(13).

Key Message Pasireotide led to a halving of median urinary-free cortisol levels in a cohort of patients with confirmed Cushing's disease (persistent, recurrent, or newly diagnosed).

The pasireotide B2305 study group evaluated the efficacy of pasireotide in Cushing’s disease. In this pivotal phase 3 trial, 162 subjects with persistent, recurrent, or newly diagnosed (not deemed suitable candidates for transsphenoidal surgery) Cushing’s disease with urinary free cortisol levels 1.5 times the upper limit of the normal reference range were randomized to subcutaneous pasireotide 600mcg (n=82) or 900mcg (n=80), twice daily. The primary outcome was defined as urinary-free cortisol (UFC) levels below or at the upper limit of the normal reference range. There was approximately a 50% reduction in median urinary-free cortisol levels by the second month of the study. UFC levels stabilized through to the end of the study for all participants(14).

You May Also Like :   Mechanism of action of steroidogenesis inhibitors

Explore the pathophysiology of various endocrine diseases and the mechanism of action of medications utilized in their treatment. Click here to learn more! 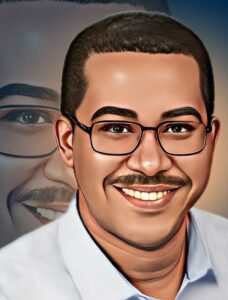 Kindly Let Us Know If This Was helpful? Thank You!

Send Us A Message

All information produced by the MyEndoConsult Team and available on this website is provided for educational purposes of health professionals only. This information should not be used to diagnose or treat any health problem or disease. This information is not intended to replace clinical judgment or guide individual patient care.

You can find out more about which cookies we are using or switch them off in settings.

Visually Impaired Mode
Improves website's visuals
This mode adjusts the website for the convenience of users with visual impairments such as Degrading Eyesight, Tunnel Vision, Cataract, Glaucoma, and others.

We firmly believe that the internet should be available and accessible to anyone, and are committed to providing a website that is accessible to the widest possible audience, regardless of circumstance and ability.

To fulfill this, we aim to adhere as strictly as possible to the World Wide Web Consortium’s (W3C) Web Content Accessibility Guidelines 2.1 (WCAG 2.1) at the AA level. These guidelines explain how to make web content accessible to people with a wide array of disabilities. Complying with those guidelines helps us ensure that the website is accessible to all people: blind people, people with motor impairments, visual impairment, cognitive disabilities, and more.

This website utilizes various technologies that are meant to make it as accessible as possible at all times. We utilize an accessibility interface that allows persons with specific disabilities to adjust the website’s UI (user interface) and design it to their personal needs.

Additionally, the website utilizes an AI-based application that runs in the background and optimizes its accessibility level constantly. This application remediates the website’s HTML, adapts Its functionality and behavior for screen-readers used by the blind users, and for keyboard functions used by individuals with motor impairments.

If you’ve found a malfunction or have ideas for improvement, we’ll be happy to hear from you. You can reach out to the website’s operators by using the following email admin@myendoconsult.com

Our website implements the ARIA attributes (Accessible Rich Internet Applications) technique, alongside various different behavioral changes, to ensure blind users visiting with screen-readers are able to read, comprehend, and enjoy the website’s functions. As soon as a user with a screen-reader enters your site, they immediately receive a prompt to enter the Screen-Reader Profile so they can browse and operate your site effectively. Here’s how our website covers some of the most important screen-reader requirements, alongside console screenshots of code examples:

We aim to support the widest array of browsers and assistive technologies as possible, so our users can choose the best fitting tools for them, with as few limitations as possible. Therefore, we have worked very hard to be able to support all major systems that comprise over 95% of the user market share including Google Chrome, Mozilla Firefox, Apple Safari, Opera and Microsoft Edge, JAWS and NVDA (screen readers), both for Windows and for MAC users.

Despite our very best efforts to allow anybody to adjust the website to their needs, there may still be pages or sections that are not fully accessible, are in the process of becoming accessible, or are lacking an adequate technological solution to make them accessible. Still, we are continually improving our accessibility, adding, updating and improving its options and features, and developing and adopting new technologies. All this is meant to reach the optimal level of accessibility, following technological advancements. For any assistance, please reach out to admin@myendoconsult.com

This website uses cookies so that we can provide you with the best user experience possible. Cookie information is stored in your browser and performs functions such as recognising you when you return to our website and helping our team to understand which sections of the website you find most interesting and useful.

Strictly Necessary Cookie should be enabled at all times so that we can save your preferences for cookie settings.

If you disable this cookie, we will not be able to save your preferences. This means that every time you visit this website you will need to enable or disable cookies again.